Well it wasn't quite a dress in a day (but it was in two days), but this was the theme for an Adult Education course I signed up for, which was great value at only £35 for the day.  Six of us took part and the finished results were amazingly different (sorry not to have got photos of other dresses - hope that doesn't make me seem too selfish but I felt a bit awkward asking to photograph others).  I wasn't sure about the pattern initially because I sometimes find shift dresses a little shapeless, but as shifts go I have ended up being pretty pleased with this. (Sorry about the blurry photos, I think my camera was struggling to focus duck-egg blue against a duck-egg blue wall). 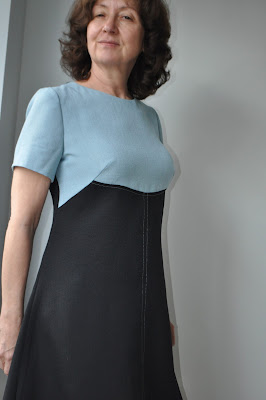 I coloured-blocked the front yoke and sleeves.  The fabric is a Robert Kaufman polyester linen which I bought mainly for the colours, however, there is a lot I don't like about it.  It is quite thin, difficult to press with a slightly plastic-type quality (yes that does sound awful).  It's wearable but I wouldn't buy it again, though the duck-egg blue is lovely and of course no wrinkles. 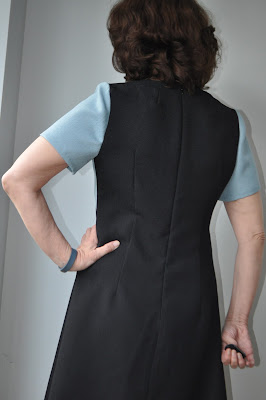 The most unusual thing about the pattern is the dart. 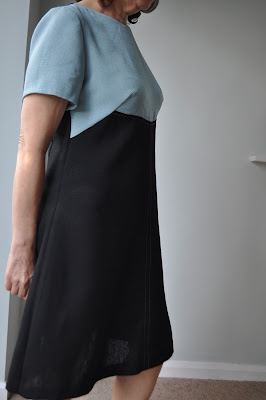 You can see what an unusual shape the dart makes, and it was actually much easier than it looks.  Infact I would say this is a good pattern for beginners.  Four of the ladies on the course had hardly done any sewing and went from cutting out to getting the zip in all in 5 hours.  You can see in this photo one of the problems with the fabric is bulge at the nipple which just won't press out!  I don't think it looks quite as obvious in the flesh  (hope not anyway). 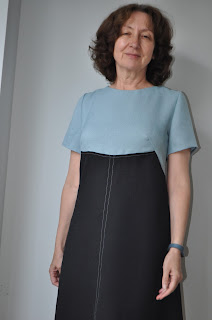 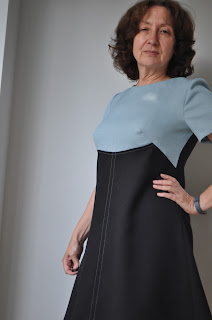 I added an inch to the bottom of the sleeve for some extra room, sleeves often seem tight on me. 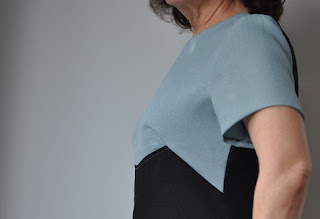 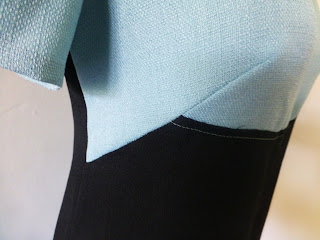 You can see duck-egg blue top-stitching under the bust and down the centre seam which is a nice feature (first time for me top-stitching in such a contrasting thread). 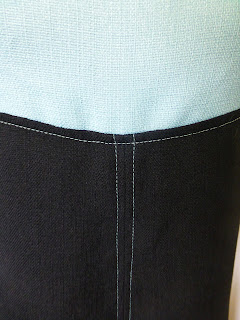 I cut a size 14 grading to a 12 at the waist, but did a full-bust adjustment of an inch, you can see from the photo below where I slashed and added to.  I also took my usual 5/6" from the shoulder width.  Very importantly I dropped the neckline by 3/4" and even with this the neck is still quite high.  I just can't stand having things really tight at the neck and this would have been unwearable for me without the adjustment.  I also added 1" to the longest length (although I am only 5'4" because I just can't rock a mini any more.  I think the dress would look better shorter and also without the sleeves (I just don't do bare arms, not my best feature).  So what I'm saying is this is an easy, wearable and quite flattering pattern, especially if you can keep it short and sleeveless.  Have a go! 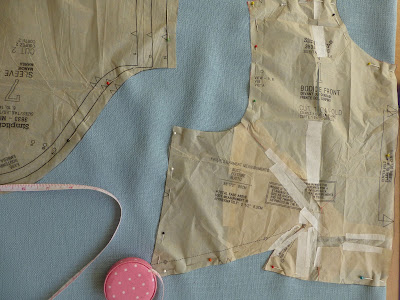