For those of us who work in education it seems to be a very tiring time of year ... lots to get through .... and this week has been full-on.  So I planned a Friday night to make it all seem a bit better.  Dan volunteered to take Rosie on her walk, and here is a weather report for then .... 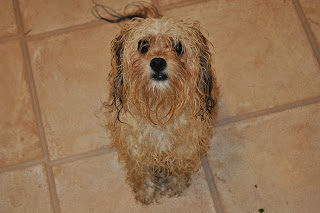 enough said!  He also made us a delicious Thai curry for tea, while I got on with cutting out all the templates I wanted for my Farmer's wife quilt.  This bit is my least favourite part but I thought it would make piecing a block all the more enjoyable if I had all the templates ready.  So I felt very satisfied at achieving this.   Then I started on my 90 minute cowl (which was probably nearer 120 minutes as I got a bit confused by the twist - as I hadn't expected to get a twist at the front and the back) while watching episodes of the mentalist with Dan and Gemma - a perfect Friday night for me.  Dan made a GIF of the photos (so this isn't a video) and for the sharp eyed among you you can see it is on a loop - the speed I'm knitting at is different on different computers - so for some of you its really slow and others I look like I'm some sort of speed knitter!

Love the funky Knitpro needles and quite enjoyed the knitting.  Anyway here is the result and actuallyI rather like it.  The only thing is it is a bit rough and this is often a problem for me because I can stand itchy things against my skin, time will tell if I ever wear it! 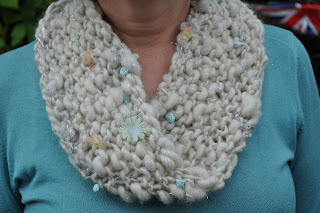 I've also had the Annell cotton I used for my coaster out again.  I had seen these crochet hearts on Bunny Mummy's site and thought I would like to have a try.   I do like Jaquie's site because she does lots of crafts like me.   There were some new stitches for me and I had to keep reading the pattern, but I do find it so satisfying to finish somethings quickly which is a challenge.  First a sunburst circle

Then a coupe of more complicated rows using stitches I haven't tried before.  Does anyone else get confused with which crochet stitches are which.  I though that my Rown Crochet book would simplify this but it didn't ... and it seemed as if half double and half treble are the same stitch!  So in the end I just did what I thought and the result was OK.  I used Jaquie's idea of blocking with some spray starch and that really helped the shape. 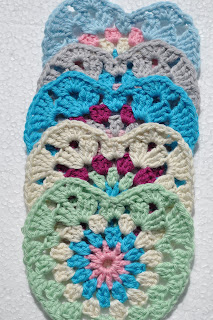 I've made them into some bunting to hand around a mirror .. and this is half 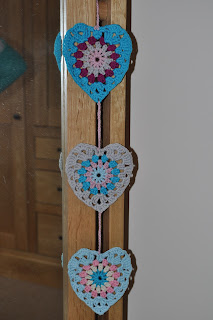 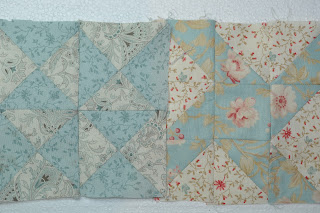 I've made some more Farmer's wife blocks and I am really enjoying making these.  Can't believe that 6 months ago I decided I didn't want to do any more quilting (though I might feel the same when I start joining them all together), but at the moment I love picking which fabrics to use and the satisfaction when the pieces actually fit (nearly) accurately.  I think I'll actually be disappointed when I have enough blocks.  There are 2 in each picture. 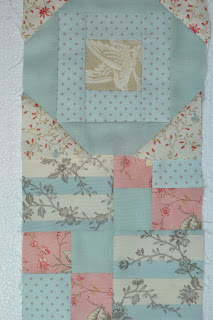 Couldn't display these as I wanted but it is getting a bit late now so they will have to do.  We've just returned from seeing Prometheus at the cinema, which was OK but not as good as Alien.  Some definitely shocking moments though!  So enough for this week.  Many, many thanks to those of you who leave a comment ... it is such a treat!  Take care and have a great week.
Posted by mags at 14:33