Usually I am a bit torn about staying in to watch the Wimbledon final or stitting in the garden enjoying some weekend sun ... but no contest this year!  (Shame Murray didn't win).   We did have a bit of sun Saturday and enjoyed some time in our favourite spot by the river. 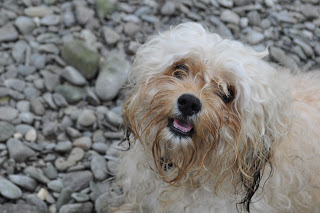 As I mentioned previously Dan and Gemma got engaged last month and they are planning to marry in July next year, just after they graduate.  So yesterday we went looking for wedding venues.  I think it has now been decided that student finances don't run to a hotel and we are looking at village halls.  This is a rather special one in Hornby, with lovely staff and you get the whole place for £425.00.  I think with copious amounts of bunting, flowers and loving friends it will look great ... no outside though so we practised some weddingy looking shots at the nearby bridge. 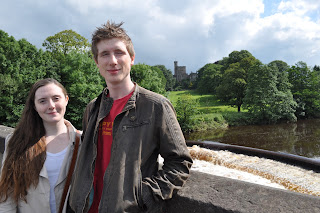 Given my quite prolific crafting over the past few months, you are probably waiting for my next completed item!  Fraid it won't be coming this week because I'm still working on bigger projects.  All I've managed is another couple of Farmer's wife blocks and it wasn't my most successful week for this ... not quite as accurate as I would have liked. 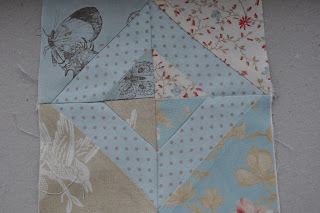 Mostly I have been knitting.  I mentioned a few weeks ago that I had never had a "stash" before, rather I bought what I needed for the next project, one at a time.  This was very disciplined ... but not much fun .... and I am slightly ashamed to say that I have now thrown myself into the crafty stashing fraternity with a vengance (this has not been helped by spending time on ebay where you bid on things because they are a "bargain" rather than you really need them).  In this spirit I already have the red noro spring garden waiting from last week (ebay), then I saw these 10 balls of Debbie Bliss baby cashmero in raspberry (£25.00) 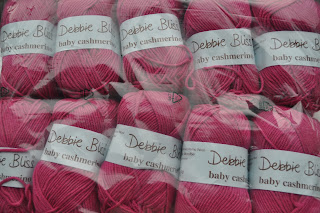 and I'm also waiting for some manos del urauguay yarn!  I am really enjoying handling my purchases ... the only thing is if you don't have a pattern in mind then you are probably going to have the wrong amount!  I have, for this reason, found some shawl patterns which use small amounts of wool  (though I've never warn a shawl in my life!).  Speaking of shawls I also popped into a shop in Arnside on Saturday and bought this wool 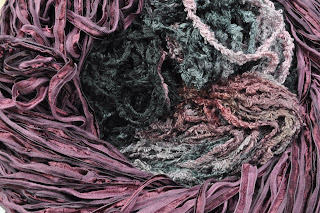 ... which is for a shawl pattern.  It looks a little like a gothic birds nest in the picture, but it is a skein of soft multi-coloured yarn and a skein of ribbon, and I think it might be a nice combination.  On top of this I have already bought the wool for my two next big knits.  Think I've gone knitting mad at the moment, and have been neglecting my ripple blanket and cross stitch.


The best colour of all though, are the flowers at the moment which are blooming despite the lack of sunshine, both in the garden .... 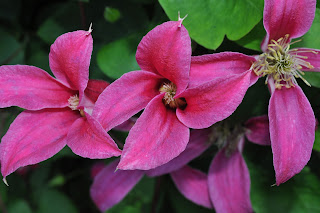 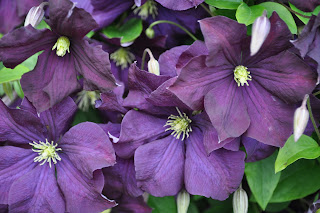 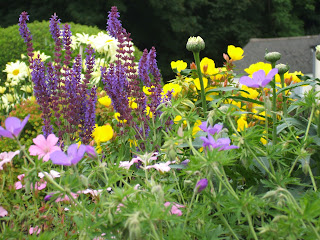 and better still in the wild.  My walk today finished in a field which was just filled with flowers - one of the most beautiful sights of the summer. 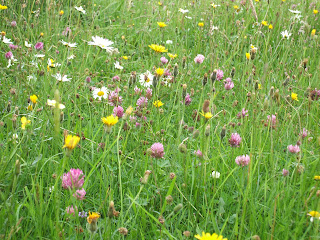 And on that happy note I will finish my post and return to my knitting and Elizabeth II on DVD.  Have a good week ... till next weekend.
Posted by mags at 13:01